Word is out! A while back, the Japanese branch of the Pokémon TCG filed a trademark for the title VMAX Climax. We now have some new information on what VMAX Climax will bring us, as it was today officially revealed during the live stream of the Kyoto Champions League that the set will release on December 3rd! This is yet another set to be released to keep up with but certainly a set you won’t want to miss out on.

Here’s what we know and don’t know about VMAX Climax:

As mentioned VMAX Climax will introduce a new rarity called “Character Super Rare,” as you can see on this Pikachu VMAXs Artwork here. We’re thinking this is certainly going to be some peoples chase card for sure!

As we previously mentioned, the Vmax Clinmax main set will contain 184 cards. Most of the cards will be reprints. However, we will see Duraludon VMAX and Rayquaza VMAX with all new artwork. 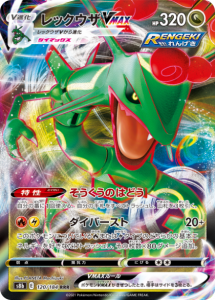 This upcoming set is going to be certainly gain the interest of the Pokemon community! Not only do we get an exclusive shiny Rayquaza VMAX, but according to PokeBeach we also get a Shiny Mew V and Duraludon VMAX.

We will also see secret rares of Nessa, Bea, Allister, Raihan, Adventurer’s Discovery, a new Acerola, and Galar Friends. The latter should be similar to Alola Friends. Some of the Gym Leaders are going to appear as their alternate designs from their League cards.

Ultra Ball will also be reprinted in this set and we think we will see Acerola be printed with an all-new effect or it’s going to be a new card featuring Acerola.